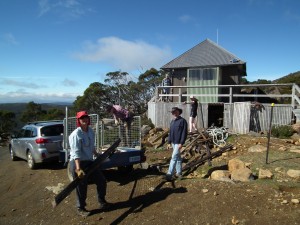 Kay Sigrist, Andrew Briggs, Stephen Webber and Elise Sigrist get into the swing of cleaning up the belt issue hut.

The 19th and 20th of March seemed to be a big weekend for working bees at Mt Mawson, as lots of volunteers worked to get the ski fields, the National Park and the huts looking great for the 100th Anniversary celebrations of Mt Field National Park (or maybe it was just a great weekend to be productive in the Tasmanian outdoors?)

On Saturday the Friends of Mt Field completed some beautiful stonework on the Lake Fenton to Lake Webster track (see Friends of Mt Field. Meanwhile higher up on the mountain volunteers at Oldina Ski Club were installing new double glazed windows and wall insulation to improve thermal performance, and a big team at Mt Mawson Ski Club continued the impressive work they are doing to re-clad the outside of their hut with weatherproof colourbond. I heard that there was also a working bee at the Hobart Walking Club getting wood in for the coming winter.

On Sunday the STSA conducted its third main working bee for the summer on a spectacular sunny day with no wind. It was a beautiful day to be out on the ski fields, and there were numerous visitors enjoying walks to the Tarn Shelf. Peter and Karen Davis worked on installing new lifting ropes and associated pulleys on the Mawson Tow. The idea of this work is to reduce wear on the lifting ropes, and minimise the risk of the main ski rope dropping down in a blizzard and becoming buried under metres of snow as happened last season. (See Mt Mawson Ski Season Opening Video under “Your Photos” on the home page to get an idea of what happens when the lifting ropes break- 5 hours hard labour condensed into 2 minutes for your entertainment!)

Kay Sigrist, Elise Sigrist, Andrew Briggs and Stephen Webber loaded a trailer of materials from under the belt issue hut to be removed from the mountain, and then headed over to University Tow where they re-erected two panels of snow fencing that had collapsed under the weight of snow last season. And Michael and Penny Wadsley continued their clean up of the motor huts with an inspection of Rodway Tow hut.

Its great to see so many volunteers contributing to the success of the Mt Mawson Ski Field – our next and final working bee for this Summer is on Sunday 10th April.