STSA’s fourth major working bee for this summer was completed on Sunday 19th March. It was 34 degrees in the Derwent Valley, but a perfect blue sky day and a comfortable 20 degrees or so up at the Mt Mawson Ski field. The day started with Stephen Webber using his Subaru to tow a trailer load of new slats up the jeep trail to the ski field, and then it was into the exercise routine to get the slats to the top of the mountain. George Yannikelis, Karen Davis and Paul Vince focussed on attaching the slats to the snow fence frame constructed at the previous working bee, whilst Peter Davis and Mark Underwood worked on re-building two old broken snow fences at the very top of the rope tow. 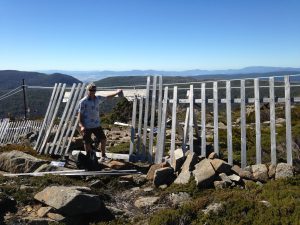 Adrian Brettingham-Moore worked on removing some redundant solar panels from the Mawson tow hut, which will be re-purposed to charge the battery for the Rodway tow, and also discovered that one of the counterweight barrels used to keep the Mawson rope tow under tension whilst in operation had fully rusted out and deposited its load of rocks onto the floor of the motor hut!

After a well-earned lunch break, Paul Vince led the construction of a small insert panel to close a gap in the lower part of the Mawson snow fence line, which it is believed contributes to a blow out in the snow adjacent to the tow line. This creates a ditch which causes problems for beginner snowboarders and skiers. It is hoped that closing the small gap, together with the new removable snow fence panel constructed at the last working bee will considerably improve the snow conditions at the bottom of the run. The final improvement will be the removal of the two rocks near the loading area. These rocks protrude under the shade cloth and create a hazard where skiers converge at the bottom of the run. The rock outcrops were left over from the slope grooming work conducted a couple of years ago – it is hoped that Parks will be able to arrange for their removal prior to the commencement of this winter season. 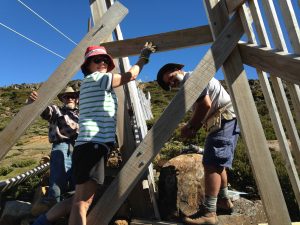 Whilst there is always more to do, Sunday’s working bee marked the conclusion of the planned snow fence maintenance and preparation for Summer 2017. Now we just wait for the snow!

There is one further working bee to be held on Sunday 23rd April. This working bee will be important for testing and repairing electric circuits, installing batteries and solar panels, and servicing and test running the tow motors.