We all have those days when you never seem to get as much done as you had hoped. And then just, occasionally, you have one where you exceed all expectations and have a really good day. Well Sunday 19th February 2017 was just such a day, when an enthusiastic band of STSA volunteers arrived at Mt Mawson Ski Field to tackle a long list of tasks.

Almost all STSA clubs were represented: Ambrose Canning and Adrian-Brettingham Moore from the Ski Club of Tasmania; Rodney Stolorz and Leigh Stephens from the Wellington Outdoor and Ski Club; Peter, Karen and Matthew Davis from Oldina Ski Club; Fred and Liz Koolhof from the Hobart Walking Club, and I believe Simon and Karen Allen from the Mt Mawson Ski Club made a cameo appearance with their trailer to remove rubbish from under the belt issue hut.

The forecast was for thunderstorms, but other than an impressive hail storm at lunchtime the weather held off and we were treated to a spectacular day of sunshine and black clouds chasing around the mountain scenery.

The team quickly tackled the task of carrying the remaining snow fence material to the top of the mountain (a good workout to start the day), and then split to work on various tasks around the Mt Mawson run. Ambrose and Matthew completed tie downs and slats for the snow fence re-constructed at the last working bee, while Karen, Peter, Rod and Leigh started building tripods for the new snow fence at the top of the Mawson Run (adjacent to the section that blew down last Winter). 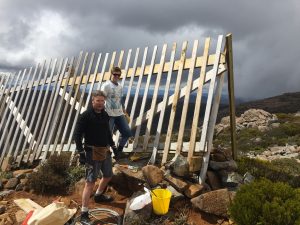 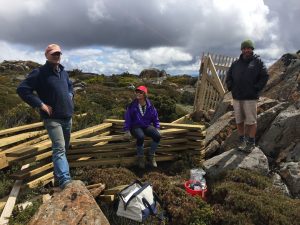 Then it was all hands on deck to erect the new tripods, connect them with beams, tie them down with wire rope, add rocks for good measure and start attaching slats – a remarkable effort for one day. 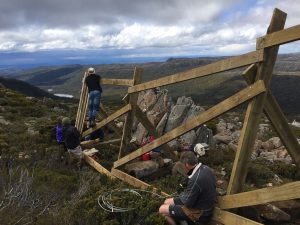 Meanwhile further down the mountain Adrian and Fred were hard at work constructing a new removable section of snow fence panel, which will hopefully prevent some of the snow blow-out that occurs toward the bottom of the Mawson run. The idea is that the horizontal slats will help capture snow during the week, but can be easily removed on tow weekends to allow skiers and boarders to pass through the gap on their way back from the Uni Run. 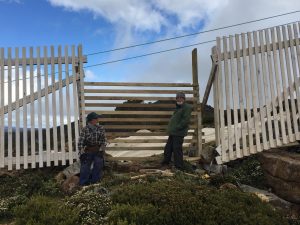 While all this was going on, dedicated Ski Patroller Liz was tackling perhaps the worst job of the day – cleaning out the ski patrol room. Normally this is not a problem, but the inadequate ventilation and lack of heating means that the temporary shipping containers currently being used as the ski patrol and patient facility tend to be mouldy and damp. This is a very unsatisfactory situation, and puts at risk thousands of dollars of equipment and medical supplies kept on the mountain for ski rescue and first aid. 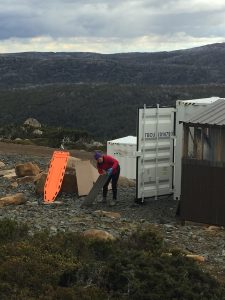 After a great day of achievement for the Mt Mawson Ski Field, we were all tired and ready to head home. Ambrose, however, was shouldering a heavy pack and heading off into a darkening stormy evening: “Just need to check the batteries at Rodway” he said!

NEXT ARTICLE →
A Spectacular Day at Mt Field