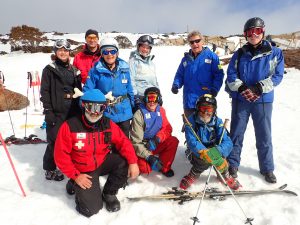 The Mt Mawson Ski Patrol – as featured in Australian Geographic

Pre-season preparation for the ski season at Mt Mawson Ski Field continued today (Sunday 28 May 2017), with 15 volunteers from the Southern Tasmanian Ski Association spending the day on the mountain doing a wide range of tasks to ready the ski field for operation. The forecast was for snow to 800 metres, but other than periodic flurries of snow the day remained mostly fine and pleasant.

A large group of Mt Mawson Ski Patrollers were present, fresh from their new accreditation by the Australian Ski Patrol Association, and they worked hard to ready the Ski Patrol Container for a short move from its current site to make way for construction of the new Mt Mawson Day Shelter. Fragile first aid equipment was relocated to the Belt Issue Hut, and the shelter porch was dismantled and removed in readiness for the contractors to start work – hopefully in this coming week.

At the same time Mt Mawson tow convenor, Ambrose Canning, conducted refresher training for club tow operators from the Mt Mawson Ski Club, Oldina Ski Club, the Ski Club of Tasmania, the Alpine Club of Tasmania and the Hobart Walking Club. The tow motors on Mawson and University tows have recently been serviced by specialist diesel mechanic Roger Kingstone, and new safety buttons have been installed to increase the reliability of the tow safety circuits. It was great, therefore, to see both tow motors start first time, enabling a good pre-season test run of both tows to be conducted.

It is planned to give Rodway tow a similar service, and in preparation for this Simon Allen, Andrew Davey and Tim Metcalf headed out to Rodway to do some preparatory work, including the installation of new solar panels to keep the Rodway battery charged.

Enthusiasm is building for a great season – now all we need is a series of good snowfalls!