A small but enthusiastic band of volunteers from the Ski Club of Tasmania and Oldina Ski Club turned out to help with snow fence improvement work at Mt Mawson Ski Field on the weekend. On Saturday morning the Davis family, Ambrose Canning and Michael Wadsley were greeted with strong winds and periodic rain showers, but this did not deter them from tackling the task of constructing 5 new panels of snow fence at the bottom of the Mawson run to complete the work started last Summer. By the end of the day the new panels were framed up, and two were clad with slats.

On Sunday the Davis’s were joined by the Brettingham- Moores and Ian Stewart. George and Adrian focused on securing the new fences, while Ian worked his magic to get the summit snow camera working again. The Davis’s completed attaching slats to the new panels. 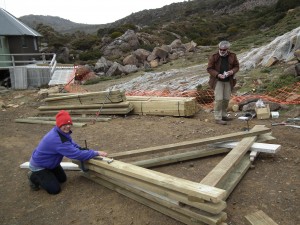 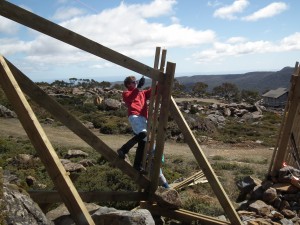 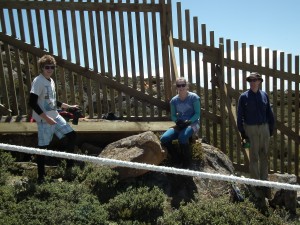 By the end of a very successful weekend working bee, the new fence panels were complete, and ready to capture the first snowfall of the new season.

There will be further STSA working bees in the New Year, and remember that participation earns you discount tow tickets for season 2015.

Also a reminder that the STSA Annual General Meeting is on this Wednesday 26th November (see notice below).