It was a magnificent day in the Tasmanian World Heritage Area at Mt Field National Park today – temperatures in the high 20s, clear blue sky, light winds and lots of people out enjoying the park (despite the pesky March flies).

Our STSA volunteers worked on two separate projects in the sunshine – repainting the outside of the Rodway tow hut, and removing an old snow fence from the top of the mountain and commencing the construction of its replacement.

Out at the Rodway Tow,  Eve Winter, Karen Davis and Adrian Brettingham-Moore did an awesome of preparing the Rodway tow hut for an external repaint, and getting the first coat of new paint onto three sides. Its a superb setting for Tasmania’s steepest lifted ski tow, and today the whole scene sparkled. Eve, Karen and Adrian received lots of positive comments from all the walkers out enjoying a stroll on the Tarn Shelf. 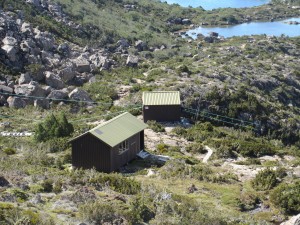 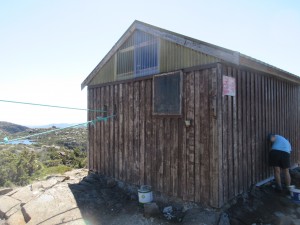 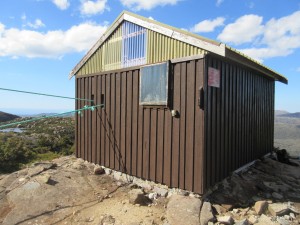 High up on Mt Mawson George Brettingham-Moore, Matthew Davis and Peter Davis got a solid work-out carrying timber beams to the top of the Mt Mawson run to start the construction of a replacement snow fence. It was hot work, and with both hands committed to holding the timber there was nothing left to swat the March flies! The snow fence plays an important part in distributing snow down over the top of the ski-run, and the old hardwood fence was long overdue for replacement. By the end of the day two panels were framed up, ready for the attachment of slats at the next working bee (21-22nd March).

A huge thanks to Eve, Adrian, Karen, Matthew, George and Adrian for their volunteer work to prepare the Mt Mawson ski field for the 2015 season. 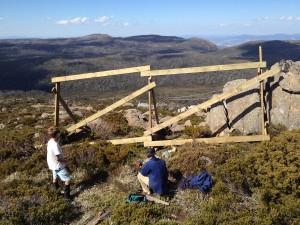