A very stable period of high pressure systems centred over Tasmania has lead to some beautiful sunny days, and some very low temperatures. No precipitation to get our ski season underway, but great weather for being on the mountain. Accordingly an enthusiastic band of STSA volunteers headed up to Mt Mawson on Sunday 11th July with a focus on getting the Rodway tow ready for the next big snow dump.

The Rodway tow is one of Australia’s most iconic (and steepest) runs with spectacular views of Lake Seal and the Broad River Valley, and with a great “out there” atmosphere. In contrast to almost all other ski tows it has no vehicular access at any time of the year and accordingly all tools, equipment and materials must be carried by hand to and from the tow location. Even though it was sub-zero all day everyone got a solid workout carting loads back and forth.

Icicles on the Rodway tow slope

The work was split into three distinct areas of activity: tow motors, tow lines and pulleys, and general hut cleanup. Craig Larsson, Perry Cunningham and Tim Metcalf focussed ed on ensuring the Rodway tow motor (a classic 6 cylinder Lister diesel) was ready to run, and undertook some re-alignment of the main bull wheel in the hut including greasing bearings on the wheels.

Ski Patrollers Paul Vince and Liz Koolhof ensured all the ski patrol equipment needed at Rodway was in order, and Rod Stolorz, Peter Davis and Perry Cunningham climbed the tow line to get the ropes down and ready for a test run. Annette Levis and Karen Davis helped with the cleanup around the hut, and everyone contributed to carrying unneeded equipment and rubbish back to Craig’s trailer. 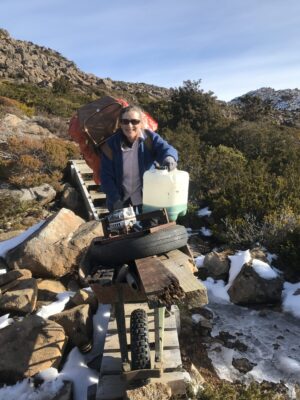 STSA stalwart Liz Koolhof loaded up for the trip back

Late in the day the efforts of the volunteers were rewarded as the Rodway Tow motor was successfully started, the tow safety circuit all checked out, and the tow was successfully run. It was great to see the tow rope turning over this iconic slope again – now we just need that good snowfall! Then as the light began to fade it was time for the final carry of gear back out along to the cars – a great day’s outing with a good sense of achievement for all who helped out. Thanks again to all the volunteers who help to keep Southern Tasmania’s only downhill ski-field operating.

NEXT ARTICLE →
Joined Up