After a number of near starts, there was enough snow for the 2017 ski season to get underway at Mt Mawson on Sunday 13th August. STSA volunteers led by Rudy Kloser from the Mt Mawson Ski Club headed up to the mountain on Saturday to tackle the big job of digging out the tow, and resetting the pulleys – we understand Rudy even raked in support from his family members. About 30-40 cm of fresh snow fell on Saturday, and on Sunday a beautiful sunny Tasmanian winter morning dawned – just what everyone had been waiting for.

The tow was ready to run, but where were the customers? 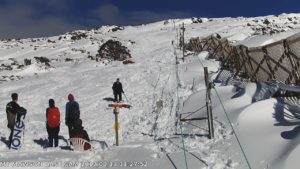 Mt Mawson Ski Tow ready for operation – but no customers! 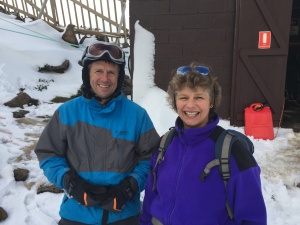 It turns out they were queueing at the Mt Field Visitor Centre boom gate, waiting for the snow plough to complete the job of clearing the road. The Department of State Growth (DIER) is responsible for clearing the road, and they have contracted the task to Stornaway. STSA has previously raised concerns that the tractor used by the contractor is too slow and small for the task, and this was confirmed again on Sunday. It took the tractor almost 5 hours to clear the road and carpark, even though this was not a particularly big snowfall.

Unfortunately once the road was clear there was a further delay, whilst the contractor bought in an engineer in to check a washout on the road (which was well below the snow-line).

The queue of visitors and locals waiting to get up the Lake Dobson Rd was over 100 cars long, and stretched from the boom gate right out of the National Park. Many people queued for other 5 hours to get through, and others gave up after 3 or 4 hours of waiting. Many families and skiers were disappointed that on the best day of the season so far they spent their time sitting in a traffic jam. 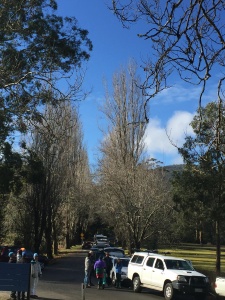 Traffic queued out of Mt Field National Park waiting for the Lake Dobson Rd to be opened, Sunday 13 August 2017 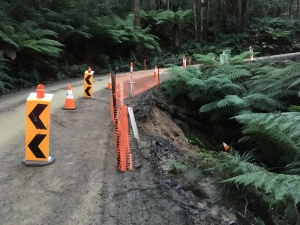 Washout 4 km up the Dobson Rd

Finally the road was opened just before 1:00 pm, and those that had stuck it out headed up the Dobson Rd to enjoy the snow. It was a spectacular drive, with Mt Field National park looking superb in its winter cloak of snow. 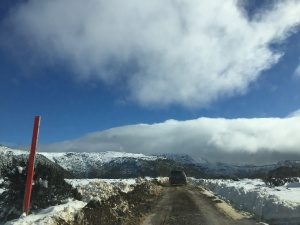 Finally a few hardy souls arrived at the Mt Mawson Ski Field to enjoy a truncated afternoon of skiing and boarding – but at least we are now underway with season 2017! Let’s hope that the issues with the snowplough (tractor) and road damage can be resolved so that visitors are able to make the most of Southern Tasmania’s only operating ski field this winter. 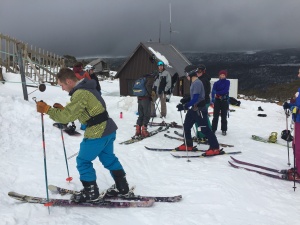