After the wild weather and storms of the past week it was a big effort by the volunteers of the Southern Tasmanian Ski Association to get the tows running at Mt Mawson Ski Field to kick off Tasmania’s ski season in the South. After travelling to the mountain on Friday night a decision was made to run the tows, but conditions were still challenging on Saturday morning when volunteers from Oldina Ski Club started preparing the tows to run. The snow was deep and soft, making progress up the hill difficult. A big thank you to Bishwa Oakes and Mischi Sigrist who took on the task of lowering and de-icing the rope tow at the top of the mountain, and to Stephen Webber, Dave Watts and Eve Winter who spent many hours shovelling to construct an even tow path for the snowboarders to use.

We had good crowds on both Saturday and Sunday, and many winter enthusiasts made the effort to negotiate the traffic jams on Wombat Moor and in the Dobson Car Park, and to walk up the road to ski and board in conditions which continued to improve throughout the weekend. The new snow fences worked well in capturing the snow of the past few days – now we just need a good followup fall to consolidate on the good base! 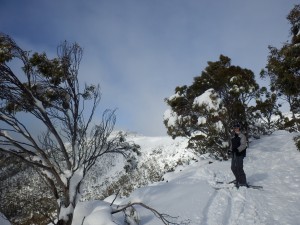 A spectacular day on the jeep trail to Mt Mawson 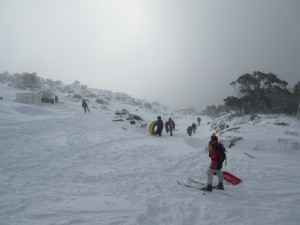 Families arrive for a day of snow fun at Mt Mawson 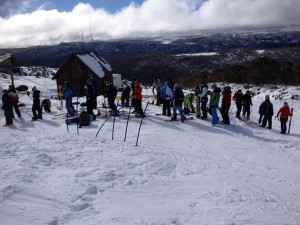 Skiers and Boarders queue for the Mawson run

NEXT ARTICLE →
An awesome effort