A remarkable effort was put in by ten STSA volunteers on Sunday to get the Rodway tow ready for operation. The first challenge was getting two 250 m rolls of new rope out to the towline -this was accomplished by using two wheelbarrows, then a manual carry of the heavy rolls out to the start of the Tarn Shelf. A full day of work then followed, under the capable leadership of Julian Oakes. The new rope was spliced onto the existing tow rope, and then slowly hauled up the mountain using the Rodway tow motor. A total of three splices were completed by Julian, Karen Davis, Stephen Webber, Adrian Brettingham-Moore, Ambrose Canning, amd Karin Allen. Craig Larsson and Fred Koolhof sanded all the low pulleys, while Peter Davis and George Brettingham-Moore rebuilt and re-wired the top safety gate, as well as fitting new lifting ropes for tow line. (Ian Stewart also made a cameo appearance at the Mawson tow hut to get the camera back on line).

By then it was nearly dusk, and the true test of the volunteers came with carrying out the 500 m of old rope. This was done as a single file shoulder carry back to the duckboards to the wheelbarrows in the dark. Fortunately we had several i-phones to light the way as we hadn’t anticipated needing torches! It seemed like a very long way from the Rodway shelter hut back to Mawson, but by 7 pm the task was complete. It was a great community effort, and the Rodway tow is now ready to go as soon as there is sufficient snow to run it. 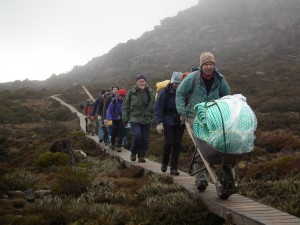 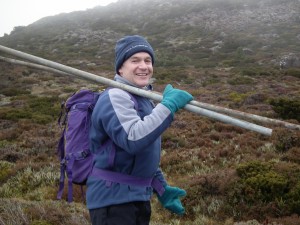 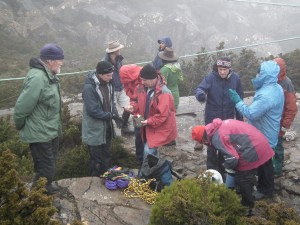 NEXT ARTICLE →
Call for Rodway Crew