The forecast fine weather turned up, and so did a good turnout of volunteers for our March working bee. We had helpers from Wellington Ski and Outdoor Club, Oldina Ski Club, Mt Mawson Ski Club, the Ski Club of Tasmania and the Tasmanian Snowboarders. It was a very enjoyable weekend, and lots was achieved to prepare Mt Mawson Ski Field for the coming snow season.

On Saturday Rod Stolorz, Peter and Karen Davis spent the morning completing construction of the frame for a 3 panel snow fence at the top of the Mawson run, replacing an old one that had fallen into disrepair. This panel will trap snow between the Mawson and Uni runs, and given its exposure to the wind quite some time was spent weighting the frames down securely with rocks. For some lighter work the trio then headed to Rodway to complete the preparation and painting of the North face of the Rodway tow hut. It was a beautiful still afternoon, and there were plenty of bushwalkers out and about – all were very complimentary of our efforts.

On Sunday the main event got underway! Julian Oakes, Ambrose Canning and Karen Davis spent the day splicing a new rope for the Mawson tow – almost 750 metres in total. This is a proactive measure to try to minimise the risk of rope breakage during the ski season. Tom Summers and Matthew Davis attached the slats to the new snow fence at the top of Mawson – a great addition to the snow catching infrastructure at Mt Mawson. Mat Cook and Owen Summers repaired the sub-floor structure of the belt issue hut, whilst Henry Warren and Tim Metcalf were involved in trouble shooting the electrics for the snow camera and tow motor. We even had a well timed conference call from the snow camera designer, Ian Stewart, who called us from the top of Mt Geryon in the Labyrinth to offer advice! Pam Mason worked diligently on painting the base of the Mawson Motor Hut, and was joined at various times by Matthew and Peter Davis, Henry and Tom. Mat Cook did an awesome job constructing new window ledges for the uphill side of the Mawson Motor Hut.

Overall it was a great community effort, and the Mount Mawson Ski Field is looking good for the coming season.

The final pre-season working bee will be held on the weekend of 18-19 April – further details will be advised closer to the time. 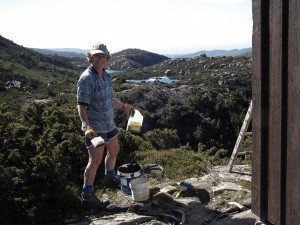 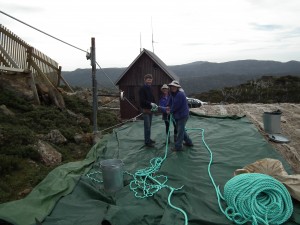 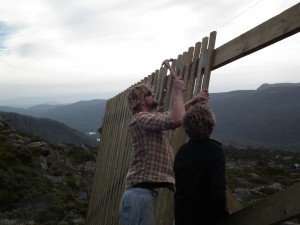 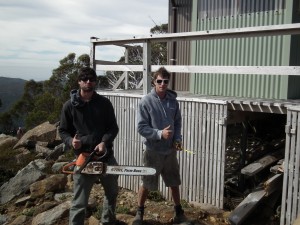 NEXT ARTICLE →
Fine weather forecast for this weekend’s working bee