Today was the first Summer working bee for the STSA, held in November for the first time to get an early start on the important snow fence project supported by the Tasmanian Community Fund. The project involves building some replacement snow fences in the gully between the Mawson and Uni runs, to improve the skiing experience and make the ski field more resilient to climate change.

The volunteer turn-out was less than we had hoped for, but the core STSA team who were present worked hard and achieved a remarkable amount for a one day working bee.

The day started with the usual fitness work-out – lugging the treated pine timber sleepers, beams and slats up to the worksite. Everyone present took a turn at carrying, with the work rate of Matt Levis and Rod Stolorz being particularly impressive. It was great to see the whole team heading up the hill with timber multiple times, and by lunchtime the majority of the timber was on site.

Then it was on to the tricky job of locating the sleeper bases on the uneven ground, and constructing the heavy tripods at the correct angle. Peter Davis, Ambrose Canning, Matt Levis and Paul Vince got the first tripod up, but pretty soon everyone was involved in some way. As the day progressed the workers got more tired, but surprisingly the efficiency of construction increased! 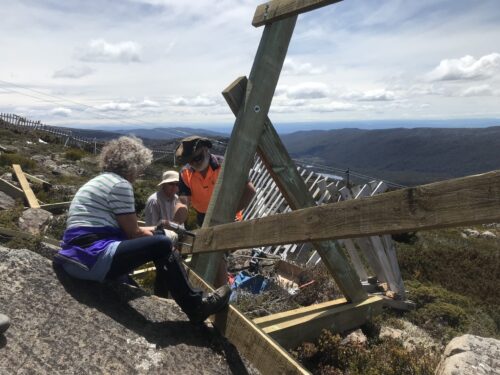 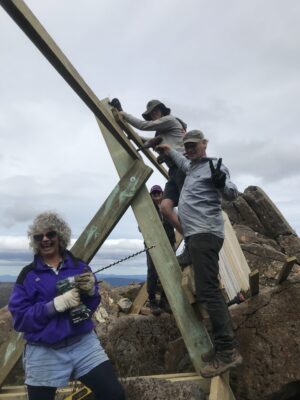 Now this is what you call a drill!

Annette Levis, Matt Levis and Karen Davis worked on attaching slats to the first of the new snow fence bays, and by the end of the day the small team of volunteers had managed to complete the framing of four complete snow fence bays. We even managed to beat the rain which started to fall as we completed packing up 👍.

A huge thank you to the STSA volunteers who gave up their Saturday to contribute to keeping the Mt Mawson Ski field going for the Tasmanian community. And for those who weren’t able to make it today the next STSA working bee will be on 10 and 11 December. 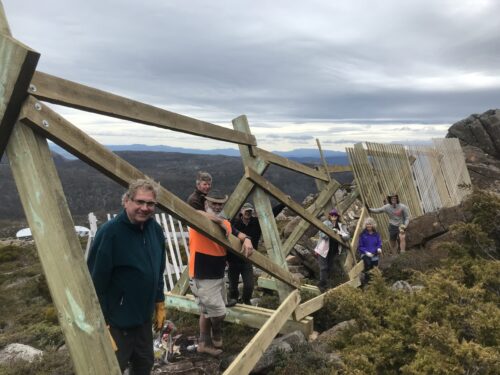