The Mount Mawson Ski Patrol and Oldina Ski Club volunteers were called to help at a medical emergency at Mt Field National Park today. A French tourist had collapsed in the snow while walking the snow gum track. He was brought into Oldina Ski Club to be warmed and the Mt Mawson Ski Patrol were called down from the ski fields to assist. A decision was made to evacuate him from the mountain by rescue helicopter, with a team of volunteers assisting in transporting him on the rescue sledge up to the Ski Fields where the helicopter was able to land. The helicopter arrived right on time, and the young bushwalker was whisked to the Royal Hobart Hospital as the evening closed in.

A big thanks to the crew of the Rescue Helicopter who responded to the call, to Ski Patrollers Andrew Davey, Liz Koolhof, Craig Larsson and Paul Vince who coordinated the rescue and patient support, and the Oldina Ski Club members who took the patient into their club and supplied bedding and dry clothes. 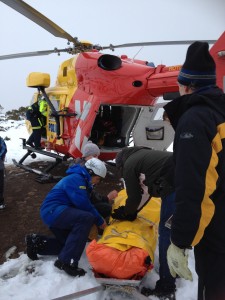 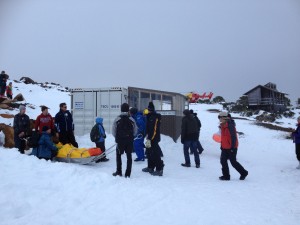 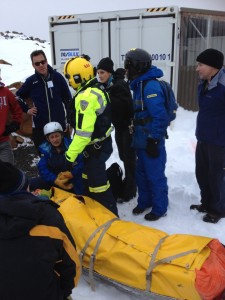 NEXT ARTICLE →
Sunday is On!